Bucket-head was a cargo inspector in the Texas City area and had just boarded a chemical carrier to conduct cleanliness inspections of a number of cargo tanks. How Bucket-head got his nickname is not clear but it brings up images of a huge man with a thick skull. Bucket-head was about to have one of the luckiest days of his life. 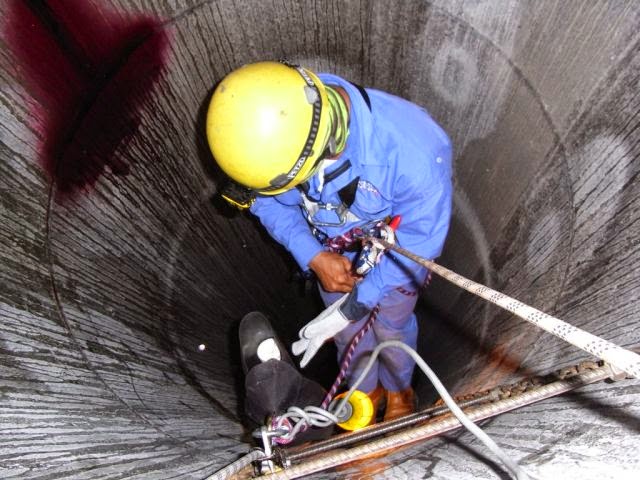 After meeting with the Chief Officer and identifying the tanks to be inspected he was sent off with the 3rd mate and a crew member to begin conducting tank inspections. The 3rd mate would enter a tank as Bucket-head watched and then Bucket-head would enter behind him. The crew member was standing by the tank to assist in opening and closing the hatches and to perform confined space attendant duties.

While Bucket-head and the 3rd mate were in one of the tanks conducting an inspection the 2nd mate unknowingly came along and called the crew member to help with some other tasks aboard the vessel. The obedient crew member left his post. The confined space attendant was now missing.

Shortly thereafter Bucket-head and the 3rd mate, still in the bottom of the tank, heard the gut-wrenching sound of the cargo hatch swing close and lock down with a thud. They scrambled to the top of the tank with the only light they had, being the flashlights that they held, and using the lights and their hands began beating on the tank hatch for someone to open it. The 3rd mate, realizing he had his radio on, began calling frantically for someone to answer him and come open the hatch but, the radio did not penetrate the tank walls or reach anyone's ears on the outside of the tank. For nearly 45 minutes they beat on the hatch until their hands were bloodied and they wore themselves out with fear. They knew what was about to come.

Tearfully and regrettably they traveled their way back to the bottom of the tank to pray and to await their fate. They could hear the sounds of nitrogen purging begin in the tanks adjacent to them and figured it would be only a matter of time for them now. There was nothing left to do but wait.

In the control room the Chief Officer was ready to begin loading operations but he was missing his tank cleanliness inspection paperwork and was trying to sort out where it was. It was at that moment that he realized that the 3rd mate was missing and called for his crew to locate him.

It was a joyful noise to Bucket-head and the 3rd mate when they heard clanging over-head and the hatch swing open letting the light of day into the tank. They scrambled out happy to be alive but, the crew member who left his post would regret it.

Bucket-head left his job voluntarily - he didn't want to go through that again and that saved HR some paperwork over the assault on the crew member.

Confined Space Entry is serious business - people can lose their lives if it is not done well. Training is required for the Entrant, Attendant, Entry Supervisor and Rescue Personnel.

At a minimum the Attendant should understand his role which is:

If you need help with Confined Space Training or would like to know more about your role as an entry, attendant, supervisor or rescue personnel please feel free to call or visit:

Chris Thuneman is an accomplished oil, gas and chemical professional who shares lessons learned over a 30 year career to help others achieve a higher level of safety awareness in some of the most hazardous working environments. Please feel free to connect with him at:

This email address is being protected from spambots. You need JavaScript enabled to view it. or at 888-859-5653